A strange turn of events led me to a xeroxed copy of an article on the “phantom leaf effect.” I believe it was first printed in Research in Parapsychology in 1982. In my opinion, this effect has profound indications for healing, and I’d like to share the basic premise with you.

The phantom leaf effect (PLE)was first discovered in Russia in 1966 (Adamenko and Vilenskaya, Technika Molodezhi, 1974), but after its introduction to the Western world, it was widely discounted. Authors P.c. Kejariwal, A. Chattopadhya, and J.K. Choudhurry of Jadavpur University were able to conduct a repeatable PLE experiment in 1979, and this article reports their findings.

Using Kirlian photography, “when a part of a leaf is cut off and removed, the Kirlian photography of the rest of the leaf can show the full leaf, the cut-off portion appearing as the ‘phantom'” (110). Although intricate details are not always seen, an overall outline of the phantom “may be found most of the time.” Additionally, a top cut portion is more likely to produce the phenomenon than a side cut, leading the investigators to deduce “that the PLE is connected with the growth phenomena of the plant leaf.” Additionally, 15-20 % was the maximum extent of the cut area possible for PLE as was previously reported by Soviet scientists” (111).

At the time of this article, the authors had no working hypothesis to explain the phenomenon. They found that the PLE is highly sensitive to magnetic fields and that “it can only be obtained 5 to 10 minutes after the cut and not later.” Most importantly, they add, “It seems that the phenomenon is connected with the life force of the leaf. As long as this force is there, the coordination and organization of the leaf exists, and the phantom is available. As soon as this organization is lost, the power of the leaf to produce the phantom is also lost” (111).

Additionally, a leaf, after being plucked from a plant, loses weight slowly at first, but quickly after a few minutes. “The phantom can be obtained only when the weight loss is slow”, showing “that the phantom leaf effect is connected with the life force of the leaf” (111).

From this short scientific article, I have drawn many personal conclusions. For one, any individual living thing has an innate tendency towards wholeness, and, while the life force is thriving, it will produce that wholeness. Humans who have lost limbs have talked about the phantom limb effect in a similar way. The scientific evidence of the phantom leaf effect is exciting to me, however, in that it proves that the organizing principle of the body is that of wholeness, and that the strength of the life force will push one towards the memory of that wholeness even when a part is disrupted or lost. I believe we have the ability to regain wholeness in the moments soon after a traumatic event has happened, just as the PLE shows that in the few moments after the leaf is torn, the life force of the leaf still envisions and creates the whole leaf. With Reiki, for example, one can heal burns and bruises much more effectively if one applies Reiki immediately after the trauma. If some time goes by, Reiki will still be effective, but not as effective as immediate application. Any being’s instinct after suffering some kind of trauma, is to heal and heal quickly. An animal curls up and licks its wounds, a mother applies her hand to the hurt child, a tree, it seems, sends healing force to its tiniest leaf.

However, after some time has passed from the immediate moment of hurt, the organizing principle, the life force, cuts its losses, so to speak, and works with the remaining body to keep it as strong as is possible. Does the starfish, when it has lost an arm, retain the entire body in its mind’s eye permanently (for their arms do regenerate)? Does the salamander (which can lose its tail to thwart predators) do the same?

Most importantly, this phantom leaf effect happens while the leaf still has its life force – in the moments after it has been plucked from the tree. Would a leaf that is still connected to the tree have the PLE indefinitely, for it would receive its full life force strength via its connection? 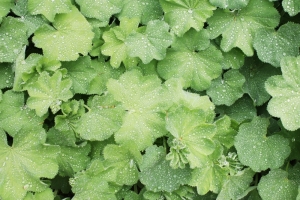 In the same way, as long as a human being is breathing, as long as a heart is beating, does our body not project wholeness? I would posit that our energetic body is always whole, regardless of the physical detriments with which we are dealing, and the strength of the energetic body can help the physical back to health and wholeness via its projection (as evidenced by the phantom leaf effect).

In sum, you are whole from the inside out, and you can trust your body to heal itself. Give it rest, nourishment, gratitude, and great love, and let it move to a place of health and wholeness as it is wont to do from birth. We should not need scientific studies to prove this to ourselves, for we can feel it in the dizzying life force that is our essence. Yet the scientific studies are helpful in this age of reason and information. Dylan Thomas, the British poet, described it beautifully in the poem named after this first line: “The force that through the green fuse drives the flower / Drives my green age…”

We – all life forms – are connected.

**Note – please see my comment below as to some new evidence that came to me in July 2014 potentially debunking the phantom leaf effect.   I am not familiar enough with all the experiments out there to know whether or not it has been produced legitimately or not.

6 thoughts on “The phantom leaf effect”

I am an integrative health coach, teacher, and healer living in Durham, North Carolina, and I believe that living your truest life is a responsibility, not a frivolity. If we each work to discover our innermost guidance and follow it, our world will be healthier and happier. Remember that you are connected to all of life and your actions, no matter how small, may be powerfully influential. In the history of our planet, the present time is critical; we each must strive to live harmoniously and sustainably, enhancing - rather than inhibiting - all of life.