Dr. Joan Vernikos, who spent most of her career as a NASA scientist helping astronauts understand and attempt to defy the aging effects of gravity, has written a wonderful book with a premise that could change the Western view of exercise, health, and aging.   Aptly titled, Sitting Kills, Moving Heals, Vernikos explains that humans are born to work against gravity, and as we age and settle into the convenience of couches, chairs, desk-work, and the like, our bodies age much more quickly than they would if they were properly working with/against gravity throughout the day.

Note, she says in an interview with Dr. Joseph Mercola, that children are up and down and playing almost the entire day.   They may nap once during the day and then sleep soundly at night, but for the rest of the wonderful daytime moments, they are truly living!  They jump, they climb, they run, they walk, they sit, they stand, they crawl, they wrestle…they rarely stop.  Children’s lifestyles set the perfect anti-aging example.   We even teach them, she says in frustration, that sitting still is what it means to be an adult.  Sit still in school.   Sit still at the dinner table.  Sit still in church or synagogue or mosque or any such place.   Sit still, we say!   Yet they squirm and wriggle themselves out of it.   Even the prevalent dispersion and negative connotation of labels such as ADD and ADHD is, in my opinion,  an attempt to squelch this natural active movement.  Children are active because activity is the foundation of health. 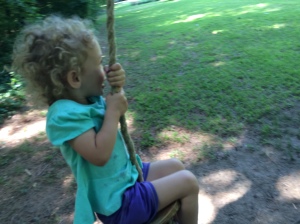 From Vernikos’ copious scientific studies and observations on astronauts, she has learned that for optimum health, we need to simply rise, against gravity, at least once every twenty minutes — more, of course, if possible.   Simple movements such as standing from your chair and walking to the water fountain, done on a regular basis, will keep your body tuned up.   Her research findings undermine  the common wisdom that says aerobically exercising for twenty minutes a day is “enough.”    Aerobic exercise is wonderful, of course, but in Vernikos’ opinion, if you had to choose, working against gravity throughout the day is more important to your health.

Astronauts who come back from an extended time in space, a gravity-free environment, walk stiffly and awkwardly as if they are aged old men.  They have lost the natural benefits that gravity gives, and their bodies have aged at an astonishing rate.   Hours of aerobic exercise in space, she notes, do not prevent that aging effect.  In fact, it seems that nothing except for being back on earth, in an environment with gravity, fixes the aging effect.

Vernikos now devotes her work and time to enlightening the world’s view about health and aging.  She wants us to understand that as we age in typical fashion in our society, we become more and more sedentary.   We do not climb much anymore, we do not jump too much, we sit for longer and longer periods.   This starts at adulthood, basically – even in our teens we have been trained to sit still and study, sit still and work, sit still and watch movies.   The more we sit, the more we put our bodies outside of the beneficial effects of gravity.   A couch potato is not so different from an astronaut, in this regard – the difference is that the couch potato has immediate access to one of the most healing forces for a human body, and an astronaut, no matter how well-meaning and disciplined, does not.

It is a simple message, and one well worth heeding.

Do not waste away.  Rise up!

I am an integrative health coach, teacher, and healer living in Durham, North Carolina, and I believe that living your truest life is a responsibility, not a frivolity. If we each work to discover our innermost guidance and follow it, our world will be healthier and happier. Remember that you are connected to all of life and your actions, no matter how small, may be powerfully influential. In the history of our planet, the present time is critical; we each must strive to live harmoniously and sustainably, enhancing - rather than inhibiting - all of life.